A huddle of people can always be found Edward Hopper’s brilliant Nighthawks painting at Art Institute of Chicago. It’s an evocative painting seems to tell a different story to each viewer. Are the people at the diner friendly? Have they been speaking? Or are they lonely spirits in the midst of a desolate night looking for the solace of silence?

As much as I love Nighthawks, the past two times I’ve visited the Art Institute I headed straightaway for Achibald J. Motley Jr.’s Nightlife, a response to Hopper’s Nighthawks painting.

Nightlife, pictured above, is as different from Hopper’s masterpiece as it is similar. To me, these paintings seem to take place at the same time of the evening, one in the dead silent evenings of 1940s white America and one in lively dance clubs of 1940s black America. 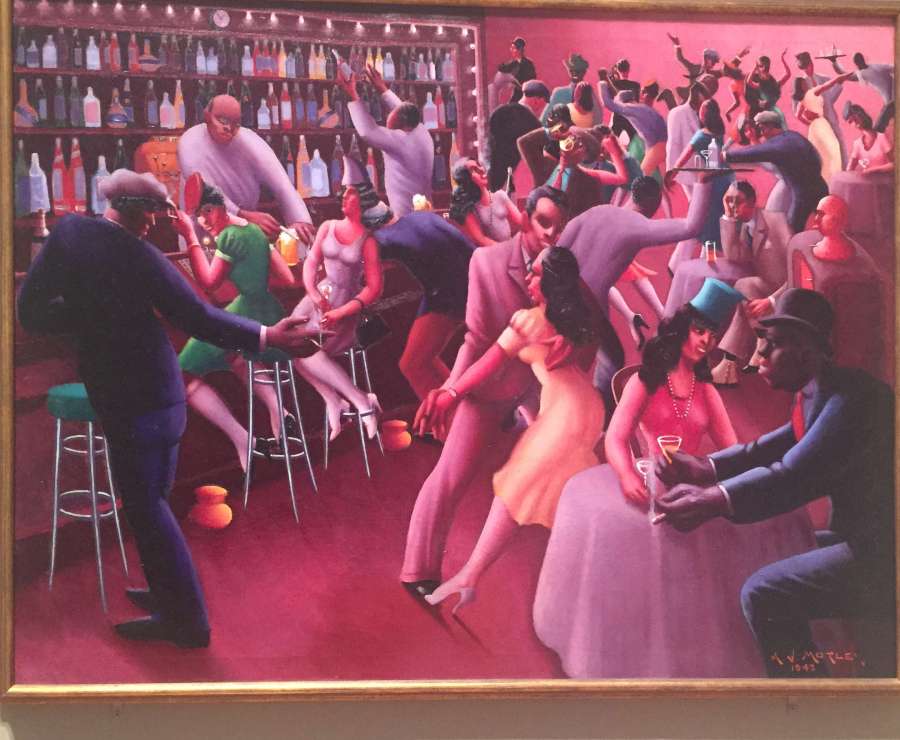 When I view Nightlife, which takes place in a dance hall in Chicago’s Bronzeville neighborhood, I find myself staring at each person and wondering how their evening is going. Are they having fun? Would they rather be at home, settled in for an evening, instead of searching for the next dance? An inviting hand gesture by a man on the left side of the painting moves across to a lonely man sitting by himself on the right side of the painting. Somewhere behind the lonely man sits a lonely woman, head down toward her drink, just in front of a crowd of people dancing. There’s no where to look in Nightlife that leaves one’s imagination alone for a millisecond.

Motley, who studied at the Art Institute and lived in Chicago for much of his life, is an artist I had not known about until recently. He lived in Chicago during what I’ve read to be some of the hardest times to be black in our city – something that seemingly hasn’t become much easier for many in our (un)fair city.

After Motley witnessed Chicago’s race riots of 1919 – which started over the killing of a black teenager at the 26th Street Beach and left 38 people dead and 500 injured – he decided he wanted to use his art to influence the public perception of black people. To start, he painted this self-portrait after witnessing the riots. (Side note, you can read more about in Isabel Wilkerson’s brilliant “The Warmth of Other Suns.” It’s a book that is long and well worth the time you put into it)

Whether perceptions of a group of people can be changed by art is something I’ve seen and heard debated time and again. I do think it matters quite a lot to see a reflection of yourself in artists, actors, writers, and musicians. But can you truly change the perception of those who are dead set against you? Can you worry about what they think as they showcase their viciousness? That I’m not sure of. My heart says yes. My mind says perhaps, but only slowly over time. All of me wonders why we’d see any group of people different in the first place. Our own solipsism? Our inability to easily relate to another?

If you have a chance, I’d advise visiting Motley’s paintings at the Art Institute. While I’m glad to showcase them here, my photography of his work does not do justice to the amazing detail of Nightlife. Go see it.