Up until that day, I had been getting a lot of sleep—eight hours, even eight-and-a-half hours. But…Ugh. Shit. I woke up after a fitful night of sleep and instantly felt the difference between five hours and eight hours of sleep. Where’s my fucking coffee? Why is that lightbulb SO bright?

I didn’t have to work that day, so I caffeinated myself and went out for a walk, bringing my miserable self, heart racing with caffeine, out into the world. Quickly, I noticed that people seemed to be giving me the stink eye.

Hey, that guy’s staring me down—well then, I’ll stare him down! We passed each other by without a word, but the eye-contact communication was clear: go fuck yourself, pal.

I walked farther and saw a group of people; they looked at me, then laughed among themselves. Bastards. Laughing at me. How dare they?

(I now see that I was essentially becoming a version of the anonymous narrator in Dostoevsky’s Notes from the Underground.)

Then I got to one of my favorite bookstores. As I was browsing, I heard the clerk telling the shop owner that she had to step outside, but I had some books at the counter.

She leans in and whispers loud enough for the whole store to hear: “That… ginger over there.”

I’ve never minded being called a ginger. Another word for being a redhead—who cares? But that day, I took “ginger” as an insult. I had in mind the U.K. usage of the word, “ginger minger”—essentially, ugly redhead—and it took all I had in my sleep-deprived brain to not yell something about how it’s good to be a redhead.

(Really, being a redhead quite the same as being a blonde- or brown- or black-haired person. We’re just exceedingly rare—our recessive gene, MC1R, only appears 2 percent of the world’s population—and we’re compared to Ron Howard more often than others.)

The clerk didn’t think that she was saying anything loud enough for me to hear, nor did she mean offense, but my brain took the slightest inkling of offense and ran with it. I finished browsing, bought my books, brusquely left the store, and started thinking bad things. I’ll never go there again, I yelled internally. What the fuck does she know about hair color?! I likely looked twisted with rage—I picture myself looking like Michael Douglas in Falling Down. 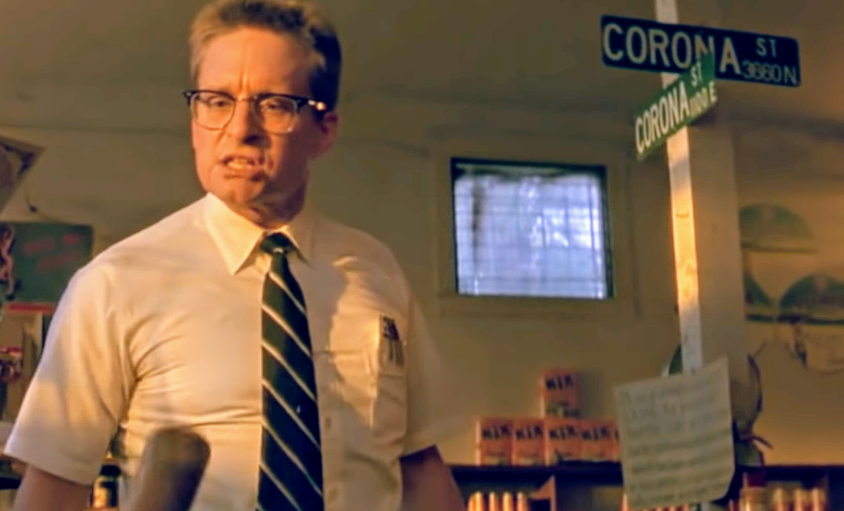 I had been reading a lot about sleep leading up to that paranoid day, which explains why I had been getting so much good sleep before that fitful night. The more I read about the ramifications of bad sleep, the more I wanted to sleep well.

Alzheimer’s, cancer, strokes, and early death were all linked to bad sleep through countless studies presented in the book Why We Sleep by Dr. Matthew Walker, a professor of neuroscience and psychology at University of California, Berkeley. I believe that knowledge is one of the most powerful drivers of change—it’s not enough to change a habit, but it can give you the “why?” behind why you want to change. Walker’s book delivered page after page of devastating, interesting, and enlightening “why?” facts about human sleep.

But the fact that surprised me was how much more emotionally aroused humans are when we’re deprived of sleep. In Walker’s book, I read that less sleep I got, the more emotionally aroused I’d be, the more social paranoia I’d feel, the less sharp I’d be, the worse I’d feel about myself—I’d look in the mirror and see an uglier version of myself. Others would look at me, too, and say things like, “Wow, you look tired.”

From what I gathered: When we lose sleep, we lose a bit of ourselves.

That day of sleep deprivation, I could feel all the negatives rushing through me after one night of bad sleep, even amid a week of fantastic sleep. I became fascinated by the feeling, excited for a night of good sleep, worried what would happen if I somehow became an insomniac. Would every day be like this? There’s no more classic line uttered by someone under the influence of a drug than “Is it going to be this way forever?”—that’s about how I felt.


Walker wrote that when he first studied sleep deprivation, he was surprised by just how much emotional arousal a poor night of sleep caused. “Analysis of the brain scans revealed the largest effects I have measured in my research to date,” Walker wrote.

Those results came from a study by Walker and his fellow researchers, which studied two healthy groups of young adults. One group was made to say up all night, the other slept normally. The next day, both groups were hooked up to brain scanners and shown the same 100 pictures. The pictures were either neutral in emotional content (a piece of driftwood, a basket) or emotionally negative (a venomous snake about to bite, a house on fire).

In more than 60 percent of the sleep-deprived people in the study, their amygdala was amplified. The amygdala is a part of the brain known for triggering the fight-or-flight response and triggering strong emotions like anger. This was the large effect Walker had mentioned.

The brains of study participants were reacting to the photos as if they were an actual threat—anyone who has ever stayed up too late watching conflict-laden videos on Reddit forums such as FightPorn or PublicFreakouts likely knows the heart-racing feeling this group felt. When your amygdala gets going, it can feel as though a photograph, video, or memory is an actual threat, almost as though it were in the room with you.

Meanwhile, the group that slept well that night had a “controlled, modest degree” of reactivity to the photos. They saw them for what they were: photos, not a threat. Their brains realized that as scary as the photo of that snake may be, it was printed on venom-free paper.

“It was as though, without sleep, our brain reverts to a primitive pattern of uncontrolled reactivity,” Walker writes. “We produce unmetered, inappropriate emotional reactions, and are unable to place events into a broader or considered content.”

Walker continued to study sleep-deprivation and its effect on emotional reactivity. He found that after a good night of sleep, the pre-frontal cortex (PFC) was more strongly connected to the amygdala. The PFC, sitting at the front of your brain just above your eyes, is associated with rational, logical thought and decision-making skills. This part of your brain doesn’t fully develop until you’re about 25, which explains a lot of things I did and saw other people do in my first 25 years.

When the PFC is coupled with the amygdala after a good night of sleep, there’s a balance of the brain’s gas pedal (amygdala) and brakes (PFC), Walker writes. Without sleep, that connection is lost—we lose our ability to hit the brakes when we need to, which is why I went careening out of control into my day after a night of poor sleep.

Another study—appropriately titled Insomnia and Paranoia—by Daniel Freeman, an Oxford professor of psychology, and a team of researchers found that higher levels of insomnia were associated with higher levels of “persecutory thinking.” Basically, every part of my sleepy day—that fella and I motherfucking each other through eye contact, the group laughing, the bookstore lady—was my own persecutory thinking. I had no idea what any of them thought of me—most probably thought little and what they did think was likely indifferent, slightly pleasant, or mildly annoyed. They were out for a walk like I was, or else they were working. But in my head… They’re all out to get me, the bastards!

In more serious cases, lack of sleep could driving mental health issues. “Insomnia is most likely an overlooked problem in psychiatric services for individuals with persecutory delusions,” Freeman et al. wrote in the conclusion of the study.

A team in Japan replicated Walker’s emotional reactivity results, finding that people who got five hours of sleep were also far more emotionally reactive than people who had a full night’s sleep. There’s the reason I felt like such a heel that day, or at least a large reason. The emotional consequences of a poor night of sleep are similar whether you’ve slept for no hours or a handful. For the chronically under-slept, that’s a brutal fact.

And not only does the brain become over-reactive to negative images and stimuli, it also becomes over-reactive with positive images. Walked studied how the sleep-deprived brain responded to positive and rewarding experiences—images of extreme sports, people winning money—and found that the striatum, associated with impulsivity and reward, had become overactive. When the striatum becomes overactive, there’s lower rational control from the PFC. Once again, the emotional gas pedal is pushed to the floor and the brake line is cut.

“Insufficient sleep does not, therefore, push the brain into a negative mood state and hold it there,” Walker wrote. “Rather, the under-slept brain swings excessively to both extremes of emotional variance, positive and negative.”

Extreme variance can mean social paranoia, mood swings, violence, and suicidal ideation. It can also mean hypersensitivity to addiction, risk-seeking, and sensations-seeking behaviors. If you ever want to see this first-hand, take a walk through a Las Vegas casino between the hours of 4 a.m. and 7 a.m. I’ve never seen so many faces twisted into pleasure, pain, and utter disbelief as I have during those hours in Vegas. They’re all at the mercy of gambling and sleep-deprivation, which swings between exhilarating and terrifying.

So how the fuck does one avoid this kind of social paranoia? Do what I did that night: sleep a full night—eight hours, a bit more if you can. You can’t make up for lost nights of sleep, unfortunately, but you can sleep better and see day-to-day improvements. Your day after sleeping well won’t be as miserable and paranoid as your day after fitful sleep.

In the back of Walker’s book, he offered 12 tips for better sleep, reprinted from a report in NIH Medline Plus. The full list is available here, but in short, the tips are:

I’ve found that knowing about the paranoia-inducting effects of bad sleep has helped me be less of a jerk when I’ve had a poor night of sleep. I can recognize my shitty moods as soon as they rear their ugly heads and remind myself that no, that guy walking down the street doesn’t want to fight me or stare me down and even if he does, who cares? Let it go. And the person who just made some comment about how I look was probably just trying to joke around—or maybe they’re an asshole. Either way, who cares? And the person smiling at me? Yeah, they’re not smiling about how much better than me they are, they’re just smiling. They’ve probably slept well. Smile back, stupid.

I’ll be posting here every Wednesday and Sunday. Want me to write more about sleep? Want to say something nice? Want to call me a jerk? Comment below or email me at halconick@gmail.com. I’d be happy to hear from you, as I sleep very well these days.